In Conversation with Saiswaroopa Iyer, Author of Abhaya.

An IITian and a former analyst with a Venture Capital firm, Saiswaroopa Iyer’s interests include Startups, Economics, Carnatic Music, Philosophy, Politics, History and Literature of India. Trained in Carnatic classical music, she won a state level gold medal from TTD in rendering Annamacharya Kritis. She currently lives in London. 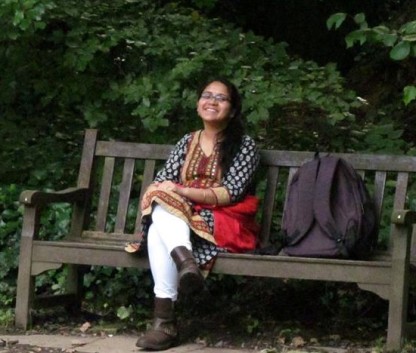 In this post, I am proud to present a brief interview with the debutante author.

1. Your debut novel Abhaya was released on 24th November. Do tell us how you feel about it!

It feels great. In fact it still has to sink in! Reviews have started to flow and initial readers are really supportive.

2. Do share some insights about your writing journey – I’ve heard it’s been quite an awesome ride!

Abhaya you see on the Kindle store is the result of five years of work! The experience has taught me a lot. From writing on a whim or a surge of inspiration to writing as a discipline, the novel has taken me a long distance. I think I have finally learnt to fight the writer’s block (touch wood!) I have discarded around 3 full drafts and many more part drafts and each draft brought a lot of learning in terms of structuring and characterization. The whole journey also helped me balance my own thought process. Guess I can go on and on. All the reviews and warm praises apart, the process of writing, discarding, rewriting and editing itself has been immensely fulfilling.

3.The book’s title and front cover seem to tell a story of their own! Would you like to tell us more about them?

4. The characterization of Abhaya seems very interesting! Was she inspired by any of the goddesses or princesses in Hindu mythology?

The characterization was one of my most interesting experiences. Initially, the thought of a female warrior enthused me a lot. But with each development in the plot, she showed a new shade. One of my mentors, in the early phases advised me to conceive a rebellious character. I instantly rebelled at the very thought! I realized later that a rebellious character is often unidimensional and to conceive a befitting partner to Krishna, one needs a multi-dimensional character.

It made me delve into the three fold path of Karma, Bhakti and Jnana. To confess, I was a diehard fan of Jnana, neutral about Karma and not at all an admirer of Bhakti to begin with. But the whole process of Abhaya’s characterization made me realize that each of the three is needed as the time and situation demand and they are not mutually exclusive. Abhaya is curious, courageous and a quick decision maker. She is an idealist but then ponders over every belief, doing a thorough analysis of her own. In short, I wanted all those characteristics in her which are normally not there in a knee jerk rebel. Her warrior side is just one of the many qualities she possesses. The hard work seems to have paid off as one of the readers called Abhaya, a people’s princess. I was just overjoyed hearing that. 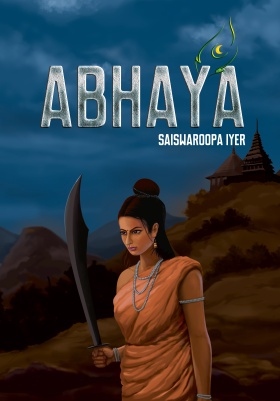 5. How did you go about researching for this book? Are there any particular books or magazines you would like to mention?

Root epics Mahabharata, Vishnu Purana and Bhagavatam mention this episode of Narakasura vadha. But the inspiration of a human Krishna was largely drawn from Krishnavatara by KM Munshi. I borrowed some concepts from Munshiji. A friend also suggested me to read Krishna Charitra by Bankim Chandra Chatterjee and it gave me insights into the peace loving side of Krishna. I should also mention “Krishna. A study into theory of Avatars” where the writer Bhagvan Das dwelt on the human side of the Avatar. As I mentioned in the note, neither of these writers deny the divinity of Krishna, but have visualized the divinity within human dimensions. I’ve followed their lead in Abhaya.

There were also books on the Shakti worship and about the legends of Assam where I discovered that Bhauma, another major character in the book is a Shakti worshipper.

6. The book seems to be set in the Mahabharath era. How challenging was it to recreate scenes from such a time period?

Don’t mean to brag, but this was the easiest part. Partly, I think it is because of my obsessive love for this time period. My association with Mahabharata began with stories told by my grandparents and parents to Amar Chitra Katha and Rajaji’s version and gradually towards the unabridged critical edition.

But my prime focus was on characters. They create the effect. Be it 2000 BCE or 2000 CE, India is characterized by a large variety of thoughts, beliefs and philosophies. Many writers try and simplify the narrative by casting the country and populace into two sides of a conflict. But the truth is much more intricate and differences are far more tapered and porous than we generally think they were. I have attempted to present this plurality of thought with some success (hopefully!)

7. Do tell us about your other writerly activities! Do you write for magazines and journals?

I do write occasionally.Swarajya Magazine and Myindmakers come to my mind. There are a number of independent blogs focusing on Indian history, Indian literature and Telugu literature which were the launching platform for my public writing. My short writing is often on a trigger or on a whim. I am trying to make it a more disciplined activity.

8. Heard you’re a singer too, among other things! How does it feel to don so many hats?

That is flattering indeed! It was my mother Usha Krishna Swamy’s dream to see me accomplish great heights in Carnatic music. There were times when the situations were hostile and yet she believed in the potential of my voice and fought along. At the same time, she had me rooted into the philosophy of devotional music as opposed to pursuing a career in commercial music. Till today she is happier to see me sing in a temple than in a studio!

The best part of Indian classical music is the exposure we get into devotional and philosophical compositions by different saints from different parts of this country and from different periods of time. In a way, the compositions of Annamacharya influenced my thought about the divine Krishna a lot. Singing them along while delving into the intended meaning helped my writing too.

9. Do share some of your learning experiences – they are sure to come in handy for many aspiring writers!

Reading is a prerequisite. Thankfully my mother managed to inculcate this habit in me despite all my resistance in my tender years! Fortunately, the beginning was with Telugu poems from Bhagavatam which she and my father made a habit to recite regularly. She introduced me to English literature later in my upper primary school days. It is necessary to read a variety of literature. That helps avoid biases and encourages independent opinion. In my experience, I have observed that going low on reading affected my writing as well. The tricky part is to not get influenced by other writer’s style.

My fantasies developed around my reading and I was attracted to strong and self-driven characters. It is my firm belief that once a character is planted in a writer’s mind, the story would flow on its own.

Secondly, we need to be patient and not get tired of discarding drafts of our writing. To me, each draft proved to be a building block. One needs to balance feedback with self-conviction and take a bold decision at each phase.

Finally, don’t give up. Perseverance is the least we all owe to our characters. Believe in them and they will never fail to be by your side,especially in times of dire need!

10. Abhaya is a self-published novel. What, in your opinion are some of the best advantages of self-publishing?

I have comes across many published authors who complain about the publishing houses insisting on changes to their manuscripts. Newer authors have very less bargaining power there. The commercial aspects too are not very encouraging. I was also told that traditional publishing houses over invest their marketing efforts onto their star-authors and that leaves very less attention on the newbies. Personally, I was put off with the impersonal touch in the couple of rejection letters I received in the initial phases.

Self-publishing thrusts a lot of responsibility on the author and one needs to be ready for that. My entrepreneurial enthusiasm goaded me on this path. We have the freedom to decide what is published. We have the freedom to take a step back and re think our plan of action. Technology has provided interesting breakthroughs in this direction. The proportional returns are more encouraging in self-publishing.

Those who want to self-publish need to realize that marketing is totally in their hands. And networking helps there. It is advisable that aspiring authors start networking and participate in an ecosystem of their choice with all sincerity. This becomes their biggest marketing force during the grand phase.

11. Do tell us about your future projects – do you have some others in pipeline?

I am looking at the early to medieval historical India now. It will be too early to say, but I am considering the south Indian empires that preceded Vijaya Nagara Empire. Thanks to the limited history curriculum in our schools, we missed out reading about so many characters that would have inspired us. These are the rulers who invested in building breath taking temples, long lasting irrigation projects and patronized immortal literature instead of lavishing state wealth on their personal palaces. I am looking at few such not so well known Kings and their stories to write about. Hope Goddess Saraswati blesses me in the endeavour.

Abhaya is available on the Kindle store and can be purchased here. Hope you enjoy reading the book!

I'm a writer of sorts. I like to express myself through poetry and prose (fiction and otherwise). Through this blog, I hope to share these with an audience that will enjoy reading them.

5 thoughts on “In Conversation with Saiswaroopa Iyer, Author of Abhaya.”